The 1991 Project: October 9-15. Disarray in a Disintegrating System

By mid-October 1991, the discernible shift in the USSR’s economical and political situation still drove headlines. Both Moscow News, the main English-language paper, and Krokodil, the venerable Soviet satirical magazine, provided abundant commentaries on the uncertainty and severity of what was to come for the failed USSR.

In its weekly edition published on October 13, The Moscow News featured multiple articles concerning the seemingly out-of-control power shift in the USSR. Within the alarmingly titled article, “The Next Putsch Will Be Unannounced,” journalist Yevgeniya Albats likens this extreme fluctuation to the shift in 1917 from the tsarist regime. Albats goes as far as to call it a “revolutionary situation” hailing the definition of such a situation as provided by Lenin himself. Lenin’s definition of such a state is “when the authorities can no longer resolve accumulating political and economic problems and the people can no longer tolerate the aggravating crisis.” Albats notes that evoking Lenin’s ideals and the events of summer 1917 are not far removed from the situation unfolding in fall 1991 and predicts that the spring of 1992 will bring more chaos and another possibility for a putsch.

With a shortage of oil, food, and electric energy as the shriveling USSR approaches the winter season, people are reminded of war as they begin “queuing for bread” while shops lack flour, meat, milk, fish, sugar, oil, butter, and more staples. This is the argument for the beginning of another coup, as Albats writes, for  “Russia will remember its tradition of revolts sparked off by hungry people craving for bread.” This will drive revolts as the winter ushers in a “stronger drive towards sovereignty” and will leave Boris Yeltsin either “accused of betraying the interests of Russians” or the role will be passed, and Yeltsin will “assume the role of tsar.” Further aggravating the situation, the Russian Army is “barely controllable” per the Military-Political Department of the Institute of U.S. and Canada. Despite the increasingly tense situations, there may not be a second coup ramping up amongst the people and a spiraling army. However, the uncertainty and lack of cohesion within the USSR are evidence of its failure to contain and manage its own egregious policies and institutions for its people.

The idea of a second coup is one shared throughout Moscow News as the inner-workings of CPSU officials become more obvious. The depth of the corruption within the CPSU comes more to light with each passing week, highlighted in another article entitled “What does the CPSU’s money smell of? Putsch-2 what lies behind it.” The article begins by dissecting a sum of money that had been “concealed and remitted” prior to the August putsch. Through the sleuthing work of the British Guardian it was revealed that CPSU rubles were converted and accumulated in “secret bank accounts” until the day of the putsch. The Guardian also discovered “quantities of oil, weapons, and even scrap metal” were in possession of the CPSU, which controlled customs and KGB border guards.

Due to continued questionable acts by former USSR Minister of Finance Vladimir Orlov, a popular belief among analysts held that the CPSU was well aware of the coming coup and prepared to profit from the USSR before it collapsed. Much of this money was used in a personal capacity for individuals such as villas purchased through proxies. The Moscow News continues to examine the use of this corrupted money by stating “the CPSU money has been put in action” by the foundation of “periodicals with chauvinistic biases” and “openly subversive radio stations.” Moreover, the audacity of the situation is heightened as the money festers in arrested bank accounts during the “catastrophic budget situation” Russia faces. All of this culminates, the article advocates, as a call of action to the people of Russia for a legislative act to channel these adulterous funds to “meet social needs.” With the drastic state reached by mid-October 1991, the paper signaled a need for reform and radical change across the country, particularly the formation of new institutions, investigations, and a new national identity, even while fears remain. 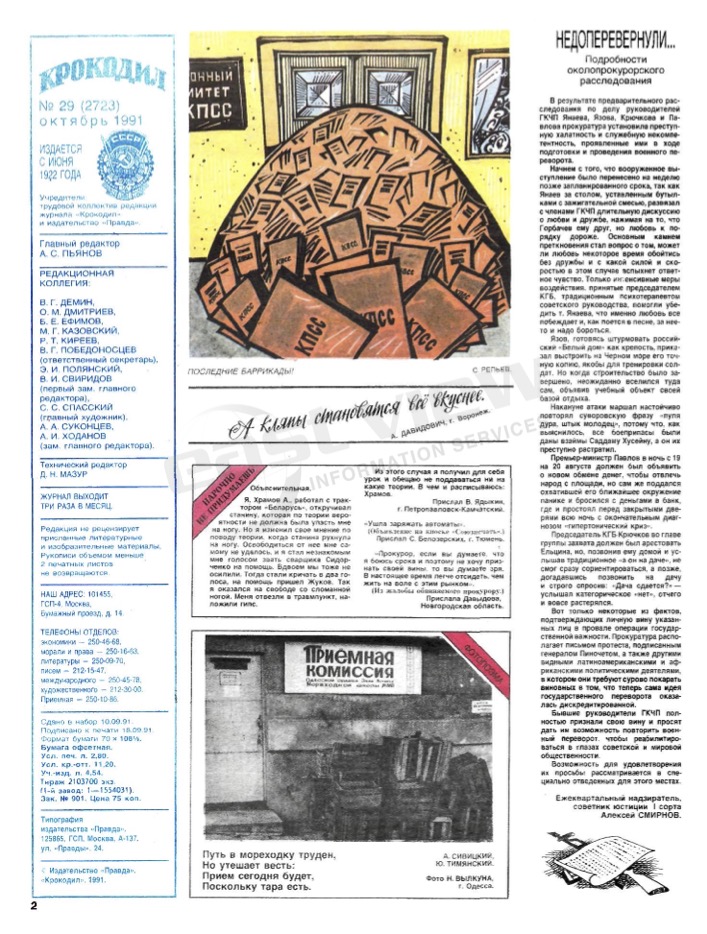 The concern with the criminality and corruption of CPSU leaders even spilled into the pages of Krokodil. In an article appearing in the October issue (#29), “A Failed Coup: The Details about the Public Prosecutor’s Investigations,” Krokodil outlines some of the extraordinary events that led up to the August Putsch and criticizes members of the State Committee on the State of Emergency (GkChP).. Accompanied with an image of a stack of papers labeled “CPSU” the article reacts to points of violence in hindsight, stating Iazov continuously quoted General Suvorov that “the bullet is a fool, but the bayonet is a fine chap,” on the eve of the putsch. Krokodil states that Yeltsin should have been arrested by KGB Chairman and coup leader Vladimir Kriuchkov, all to claim that the prosecutors “established criminal negligence and official incompetence” while GKChP leaders orchestrated and developed a military coup. Iazov ordered that an exact replica of the Russian “White House” be constructed on the Black Sea with the intent to train soldiers. These few and rather outlandish reports enhance the themes of ineptitude, uncertainty, and upheaval that the USSR have been subjected to for far too long, ultimately continuing to call on the people for a radical change.

Natasha Netzorg is a junior majoring in Russian, East European, and Eurasian Studies.