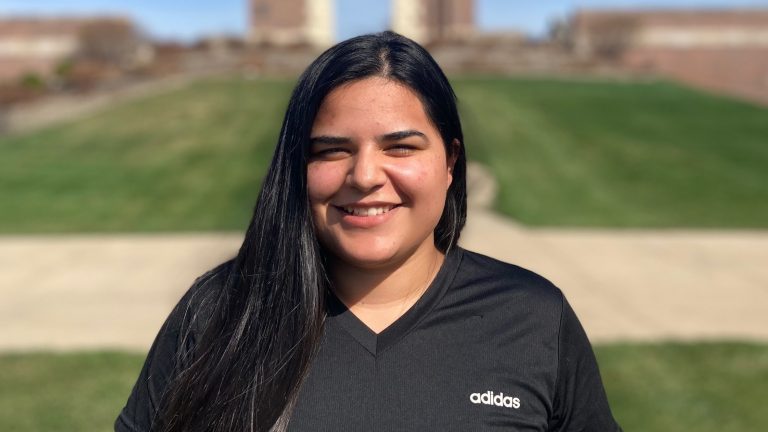 Karole Iraheta knows how it feels to be looked at like an outsider. She remembers going to other towns, like Spencer, for a track meet, and receiving uncomfortable glances when she talked to her parents in Spanish. She also knows what it is like when her whole family has to squeeze into four different apartments when they go to Oklahoma to celebrate Christmas. When her extended family comes to Storm Lake, however, the whole crew can fit into her parents’ house, cousins and all. No one scowls at Spanish in Storm Lake; they probably understand it, and if they don’t, it doesn’t sound so different anymore.

Iraheta recognizes the uniqueness of Storm Lake. Her favorite holiday, the Fourth of July, is special in the small town. “I think if I lived in a bigger city, like in California, it wouldn’t be the same,” she said. “Storm Lake is full of diversity, so we get to experience all different types of food during the Fourth of July, like in the same location by the lake, which I think plays a big part for my family.”

Iraheta’s father fled civil war in his home country of El Salvador, and her mother is an immigrant from Mexico who fell in love with the United States while visiting California. Iraheta remembered, “I think my mom came as a tourist and she just kind of decided to stay in the United States.” Her family has been in Storm Lake for twenty-five years, where she was born and raised. Like so many others working to make a decent living, her parents made the move to town once they heard that Tyson was hiring.

Her father began his work at Tyson on the line to support the family. Her mother didn’t work outside the home due to her immigration process, a ten-year devotion. The entire family felt the burdens of the United States’ complicated and time-consuming immigration procedures. Iraheta recalled her father’s sacrifices to keep the family afloat: “He’d always do overtime at the plant because he knew expenses and everything, and he didn’t want my mom to risk being caught by immigration or anything. If you work without proper documents, it’s worse for your immigration status. My dad didn’t want to risk her being deported, so he took on the extra burden to work more.” Meanwhile, her mother took to the arduous tasking of raising a family. Her older sister got a job VT Industries, and Iraheta works as a quality assurance inspector for QSI, a company in charge of inspecting the machines and controlling the chemical concentrations inside Tyson’s Storm Lake plant. Like many second-generation folks, Iraheta’s life could not be more different than that of her parents. They worked diligently so that her and her siblings could grow up with better opportunities.

Iraheta’s involvement in the community began around eighth grade, when her teachers chose her to be a part of a program throughout high school called AVID (Advancement Via Individual Determination). AVID was a class based on community involvement and improvement. Iraheta found herself providing for the less fortunate in Storm Lake. “We would tutor,” she said. “I did a lot of Santa’s Castle during the holiday season. You can do concession stands for schools, which is…where I got my service hours…during high school.” As a mere eighth grader, Iraheta did everything she could for her community.

Upper Des Moines Opportunity, a state-wide community outreach program dedicated to providing resources, be it financial or emotional, has inspired a number of younger students to follow in her footsteps. She said, “I think initially when I had started serving, it wasn’t happening as often within the school districts, students really weren’t volunteering as much, whereas now I’ll go to Upper Des Moines and see five high schoolers there.” Despite her aspirations for her community, it takes time for the rest of the student body to follow suit, she noted. More often than not, families and children in need are the most willing to volunteer their time to help others, while more privileged members of Storm Lake High School may never consider doing so. Iraheta and her family have never had to get help from any such programs, but she has seen the effects of poverty on other families. She understands the importance of setting a good example, and showing outsiders that “not everyone is the same in Storm Lake.”

Have a Story to Share?
Want to Earn an MA in History?
- Email Dr. Offenburger

Begin typing your search term above and press enter to search. Press ESC to cancel.