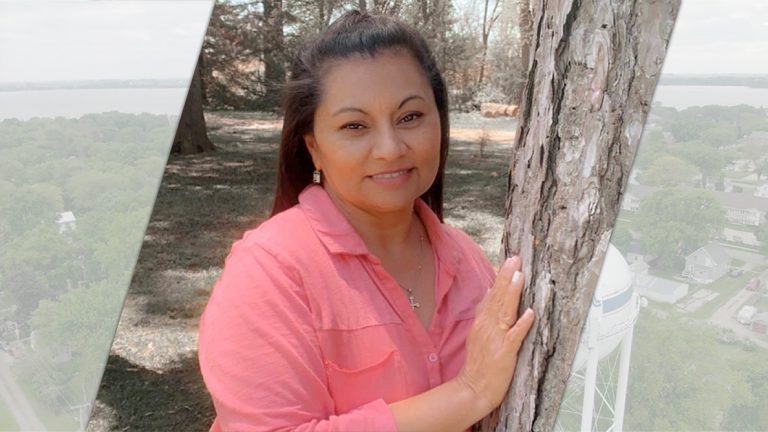 For many inhabitants of Storm Lake, the town has become synonymous with opportunity and new beginnings. Offering ample employment, quality education, a bustling and diverse community, and a safe place to raise a family, the small Iowa town has attracted individuals from across the world as a place to start a new life for themselves. Perhaps there is no better representation of this story of new beginnings than Emilia Marroquín, a community outreach assistant and member of the Storm Lake Community School District Board of Education who, after moving from El Salvador to California, found her home in Storm Lake in 2000.

Her story begins in San Salvador, the capital of El Salvador, in 1971. One of nine children, much of her childhood was spent living with her grandmother; her mother had immigrated—undocumented—to the United States when Marroquín was only seven years old. As she grew older, she experienced great hardship and turmoil. Not only did she bear witness to the wars and earthquakes that afflicted El Salvador during those years, but she also suffered from physical and psychological abuse at home before becoming pregnant with her first child at the age of seventeen.

“So many things happened in my, in those, in those few years,” Marroquín recalled of her adolescence. “My life was kind of rough.” Her addition of the phrase “kind of” here softened traumatic and distant memories.

It was 1992 when her mother acquired the paperwork for her and her sister to reunite with their mom in California. The paperwork, however, did not cover Marroquín’s two-year-old daughter. She had to make a difficult decision: to stay, or to leave her daughter behind with the plan to work in the United States to raise enough money to one day reunite with her, as she had done with her own mother. The most difficult aspect of the move, Marroquín said, “was to leave my daughter behind in that same situation that I was.”

Her daughter would not immigrate to the United States for another ten years.

Marroquín spent the next several years living in California, where she met a man with whom she rode the bus every day. Their shared public transportation routine led them to become quick friends. When she expressed that she wanted to learn how to drive, he offered to teach her. They grew closer through these lessons and eventually married. The couple would raise two more children together in California.

Their life in California, however, forever changed one afternoon while her husband was carrying her son, Matthew, around the house in an effort to get the baby to sleep. Walking past the door with Matthew in his arms, they witnessed a shooting outside the house. It was a breaking point.

“This is it, I’m tired of this,” Marroquín recalled her husband saying. “We need to get out of here.”

So she and her husband began to look for places to move. It was during this time that she remembered a coworker whose mother had visited California the year before. During the visit, the coworker’s mother had told Marroquín about Storm Lake, a small town in Iowa, a safe and tight-knit community.

After reaching out to the coworker for more information, the couple was soon hired by IBP and made the move to Iowa in November of 2000.

IBP arranged for Marroquín, her husband, and their children to live in a hotel for nearly a month upon their arrival. A lack of community resources and Spanish-speaking connections in the town made it difficult for the couple to find other arrangements. She recalled how, since her husband would take the only car they had to work each day, and since there was no kitchen in their hotel room, she and her children would walk across the street to the local Burger King for meals. She would order food based on the numbers, as she was unable to speak English at the time. “That was our life for about four weeks…so we cannot see Burger King anymore,” she said with a giggle.

The family was able to find a place to rent shortly thereafter. As for the language barrier, Marroquín sought different avenues to better her English. When Matthew began pre-school and none of the teachers spoke Spanish, she saw volunteering in the classroom as an opportunity to learn language skills. She also utilized Even Start, a family literacy program, so that she could begin attending ESL classes.

Marroquín noted that, after volunteering and attending classes for about a year, she started to grow more confident, both in her English and in her role in the community. The support that she received from the Head Start program—a federal program offering educational services and resources for low-income families—prompted her to apply to work for the program. This experience acquainted with resources in the community as well as with the people of Storm Lake, especially the Spanish-speaking residents. Marroquín ended up working for Head Start for fifteen years, becoming a home visitor all while attaining her GED, AA, and eventually her Bachelor’s degree from Buena Vista University.

She now works for the Migrant Education Program to help anyone who comes to Storm Lake obtain various community services and resources. Marroquín explained her work and its positive impact on migrant families: “And so what I do, depending on the situation…this person might need help just connecting with somebody who might be renting a place, maybe they need to apply for Medicaid. Maybe they need free food, because they don’t know where to go. They might need to know, just as simple as knowing in the community where to go to buy this specific food… I do that. You know if I have the time, I make it happen, so I just work on whatever needs they have.”

Her career isn’t the only thing that has allowed Marroquín to be a key player in the Storm Lake community. She is also a member of the Storm Lake Community School District Board of Education. Inspired by other non-white community leaders who have run for both school board and city council, Marroquín recognized that her election to the Board of Education has helped other residents of color step into an active leadership role in the schools. “I guess maybe I opened a little bit the door for all the other ones to see…’If she can do it, that is enough,’” Marroquín humbly said. She continued to view herself through the eyes of a recent arrival: “’She is not native to the US, she doesn’t speak perfect English, and you know, she didn’t go to school here and she can do it, why can’t we do it?’”

Though her experience in Storm Lake has been overwhelmingly positive—met with acceptance, support, and neighborly kindness over the years—her time in Iowa has not been without instances of friction and even, at times, hostility. Marroquín remembered receiving a phone call from a leader in her church, during the last presidential election, questioning her about criticism she had expressed towards Donald Trump. The call left her feeling not only upset that her personal beliefs were being brought into question, but isolated from her place of worship. “I’m going to be honest,” Emilia says of the incident, “since that day, I haven’t been able to go back to my church.” She has since been attending another church in town.

Another, perhaps more jarring incident occurred while Marroquín’s daughter, Brianna, was driving back to Storm Lake from Morningside two years ago. Stopping at a gas station to refuel her car, Brianna was being helped by the cashier, when a man behind her, upset that she was being served before him, started making remarks to her about Donald Trump. Brianna—whom Marroquín notes is “very quiet” and “avoids any conflict”—went back to her car after the exchange, only for the man to follow her out and pour his bottle of Gatorade all over the windshield of her vehicle. She never reported the incident to the police.

Marroquín, however, views these as isolated incidents that do not represent the overall experience of being a person of color in Storm Lake. She holds onto the inclusivity and supportive nature of the community, providing several examples of random acts of amity and goodwill, such as a group of passersby digging her car out of a snow bank during her first week after moving from California. “Honestly,” Marroquín asserted, “what I received in Storm Lake was a lot of support in the way that, no matter who you were, people were there helping you.”

When asked about her decision to leave El Salvador, she maintained confidence that she made the right decision. The painful memories of her childhood and the desire to protect her daughter from living those same experiences alone assured her that she was right to leave. Considering the sacrifices she had to make to escape those conditions, Marroquín acknowledged that she hasn’t been back to El Salvador in almost twenty years. “It’s not because I don’t love my country, no, it’s because I have those traumas,” she said. “They never go away.”

Her daughter has since moved to Storm Lake and, although it was not easy for either of them to rekindle their relationship following the separation, the two women have overcome their shared traumas. “She’s a married lady and she’s a great mom,” Emilia said of her daughter. “I cannot say enough, you know, to thank God. How the way she is is what I visualized, what she will be one day, and it’s what I keep telling her. That even though your dad did this and that, I thank him because somehow, you are the way you are because he was there behind you, and we did as parents with you as much as we could for you to be a better person.”

Though the United States offered freedom from the traumas she endured throughout her youth, it was Storm Lake, not California, that finally allowed Marroquín and her family to have the new beginning they needed. “I think Iowa, or Storm Lake, gave me this opportunity to become myself. Who am I, no…I discovered who I was in Storm Lake,” she said. “I never imagined myself doing any of the things I’m doing right now. Never, never, never, never, crossed my mind.”

Have a Story to Share?
Want to Earn an MA in History?
- Email Dr. Offenburger

Begin typing your search term above and press enter to search. Press ESC to cancel.